2.1. Normative base and classification

PHAR are the localizing safety system elements. Designing, manufacturing, performance tests, component parts and equipment tests are performed according to the following norms and regulations: 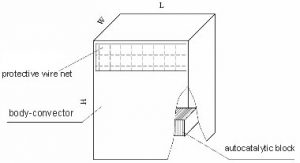 The hydrogen process of recombination should start at minimum hydrogen volume concentration depending on the steam and gas  temperature:

Converter (housing) is used for directing gas flow through the PHAR from the bottom to the top.

A catalyst module should be a removable cassette, in which there is the material with autocatalytic covering.

The PHAR gas mixtures, containing hydrogen should recombine being in contact with catalysts. Heat evolution during this reaction should decrease gas density in the bottom of a recombiner and simulate convection, providing a lot of oxygen on a catalyst and high coefficient of efficiency.

Hydrogen peroxide can be replaced by hydrogen nitrate (НNО3) -1,0 g/l. Cycle time – no more than 10 hr per one fluid.
Frequency – once a year.

Distillate cleaning should be carried out after every cycle. If material is carbon steel, such details should be covered with polymeric and protecting coatings – GOST R51102-97.
Materials, half-finished parts, components and purchased parts applied for PHAR manufacturing and  maintenance, have enterprise-supplier documents which proves its delivery goes according to federal standards regulations or technical conditions.

PHAR is the element, demanding no supervision over its operational process.