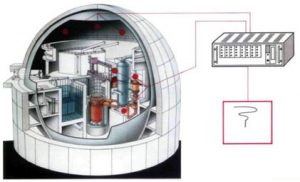 The Framatome ANP system for measuring hydrogen concentrations within the containment of PWR or BWR nuclear power plants is equipped with H2 sensors. In this way, it is possible to monitor the area and time distribution of hydrogen concentrations after a loss-of-coolant accident continuously, simultaneously and without a sampling system, i. e. without radiation exposure of the operating personal. The measured values are displayed in the control room.

These telemetric cables pass through a number of spatially separated cable penetrations out of the containment to the switchgear building. Here, the signals from the sensors are processed so that the actual concentrations can be displayed and logged on a multichannel recorder in the control room.

The LOCA-proof H2 sensor operates on the basis of catalytic oxidation of hydrogen on a heated filament. The atmosphere to be monitored diffuses into a measuring cell. Any hydrogen present is catalytically oxidized with ambient oxygen on a platinum element. The resulting temperature increases causes an increase in filament resistance, producing a signal corresponding to the hydrogen concentration. A resistance thermometer, which can detect the temperature of the air in the containment, is incorporated in the H2 sensor. 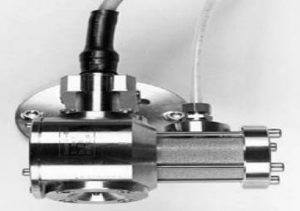 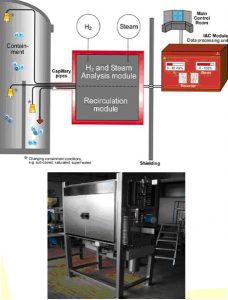 During BDBA scenarios significant quantities of combustible gases and large amount of activity could be released into the containment atmosphere.
This hard environment requires measuring systems which are highly radiation resistance and qualified under BDBA conditions.

Problems to be solved
Monitor Hydrogen and steam distribution inside containment to assess of threat to the containment caused by combustion loads / deflagration risk and perform effective accident management.

The FANP hydrogen monitoring system has been or is to be installed in the following nuclear power plants:

The FANP HERMETIS system has been or is to be installed in the following nuclear power plants: